3 Ways to Remove Wind Scorpions From Your Home 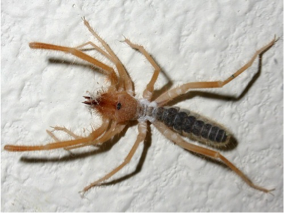 Despite their name, wind scorpions aren’t scorpions, and they are often misidentified as giant spiders. Though they are neither spider nor scorpion, wind scorpions are a mixture of the two and are often referred to as sunspiders, solpugids, camel spiders, and solifuges. These nasty-looking critters appear to have five pairs of legs thanks to a set of leg-like sensory appendages known as pedipalps.

In the United States, wind scorpions are typically light brown or reddish with cream or grayish posterior body segments. They usually only have two forward-facing eyes in the center of their head, and some species have rudimentary lateral-facing eyes. They can grow to five or six inches in length. They are not venomous but have two pinchers capable of slicing skin and cutting through thin bones.

Removing Wind Scorpions from Your Home

Wind scorpions are not capable of causing significant harm to humans, but they can bite out of self-defense. This makes them a threat, especially to small children and pets. Keeping them out of your home should be a priority when you live in an area inhabited by wind scorpions.

Though they are considered pests, wind scorpions help keep other more severe pests in check, so catching and releasing them is highly recommended if you find them in your home. However, when you catch and release wind scorpions, it fixes the immediate problem, but they may find their way back inside your house once released.

Checking your home for areas where wind scorpions can gain access is of the utmost importance. If you find cracks in your home’s foundation, around doors and windows, etc., you will need to seal these cracks off to keep wind scorpions out. Sealing your home will also help keep other pests out that wind scorpions feed on, but this method only works when you have cleared your home from existing pests.

Moisture is one of the main draws for wind scorpions to invade your personal space. If your home has any plumbing leaks or humidity issues, wind scorpions will take advantage of these damp areas. Correcting moisture issues is an excellent way to deter wind scorpions from entering your household. Using chemicals as means of controlling wind scorpions is not recommended and, in most cases, ineffective.

Wind scorpions rarely invade homes unless they are searching for water, prey, and shelter. That said, they are nearly impossible to keep off your property. Wind scorpions are nocturnal hunters and shelter under logs, rocks, landscaping timbers, and other ground covering debris during the day. As a preventive measure, keeping your yard clear of such ground covers will reduce the chances of a wind scorpion finding its way inside your house.

When faced with an invasion of wind scorpions inside your home, you may have to turn to a Houston exterminator. A professional exterminating service such as Bulwark Exterminating is well equipped to access your unique situation and execute a plan to eliminate the threat.

Wind scorpions can be intimidating, but they are a benefit to have around for the most part. However, when they have entered your home, quick action should be taken to get them out. Contact Bulwark Exterminating today.