Soul-searching in Babe in the Woods 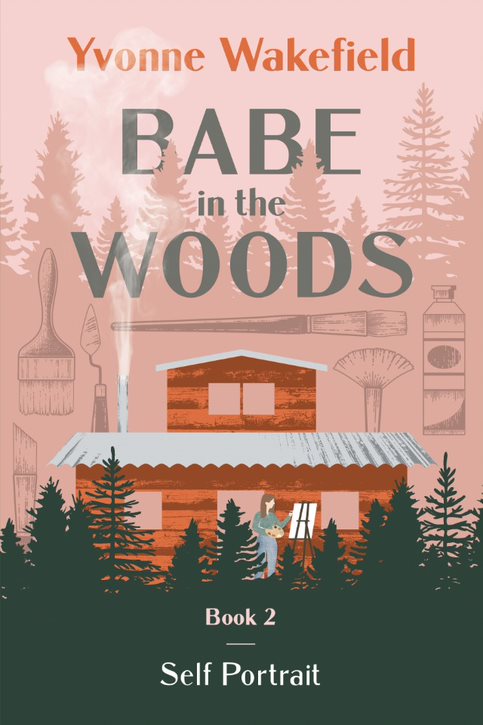 What “remote” meant before the pandemic

Throughout this pandemic, everyone has had their own taste of being “remote”, whether that means you worked remote, did online school, or were separated from family and friends. In Babe in the Woods: Self Portrait, Yvonne Wakefield tells the story of how and why she went off the grid to live in a log cabin as a young adult. After the unfortunate death of her parents, she uses what little money she has left to her name to purchase land and build a log cabin by herself. Following the first book of this three-part series, she dives into how she matured not only as a young adult, but also as an artist.

She takes us through her thought process of experiencing the first snowfall in the log cabin, only to come to a funny conclusion; she had grown “dull”. Despite having taken an unconventional path into adulthood, building a log cabin on the fly, and successfully living off the grid, Wakefield decided she was not nearly done soul searching. She could not and would not spend the rest of the year snowed-in. She begins this second book of a three-part series, refusing to succumb to cabin fever.

·                  The need to do more soul searching became abundantly clear in January when the thundering babble inside her head became overwhelmingly greater than the soul-shattering silence she once found comforting in the wild. This is when she knew it was time to leave her beloved log cabin and try something new: community college.

While most readers may not be able to relate to her experiences of building a log cabin, I’m sure many can relate to her frustrations in community college. She felt stifled by the institution that put value on percentage points rather than common sense. While colleges nowadays may be starting to move away from placing testing scores on such a high pedestal, I think most will agree that it is still a numbers game. After living on her own in the log cabin for a while, it is not surprising that she found it hard to assimilate well into the new educational environment. Even for people who didn’t begin their adulthood in a remote log cabin, I can imagine any transition into college having the potential to foster similar experiences.

Unhappily living in a trailer for as long as she could bear it, she finally drops out of college and puts her money toward something more useful: a truck with a canopy camper on top. This is where Wakefield’s life takes a turn for the better, upon meeting a woman named Leona. They quickly hit it off and arrange a funny agreement of Leona giving drawing lessons in exchange for Wakefield’s help building her a home. As a result of this new relationship, Wakefield gains a newfound appreciation for art, solitude, and independence.

From trying out the conventional college path, to developing her skills as an artist, Wakefield writes an insightful tale as to how she paved her own path through life. Perhaps Babe in the Woods: Self Portrait will inspire you to define and create your own version of being remote.