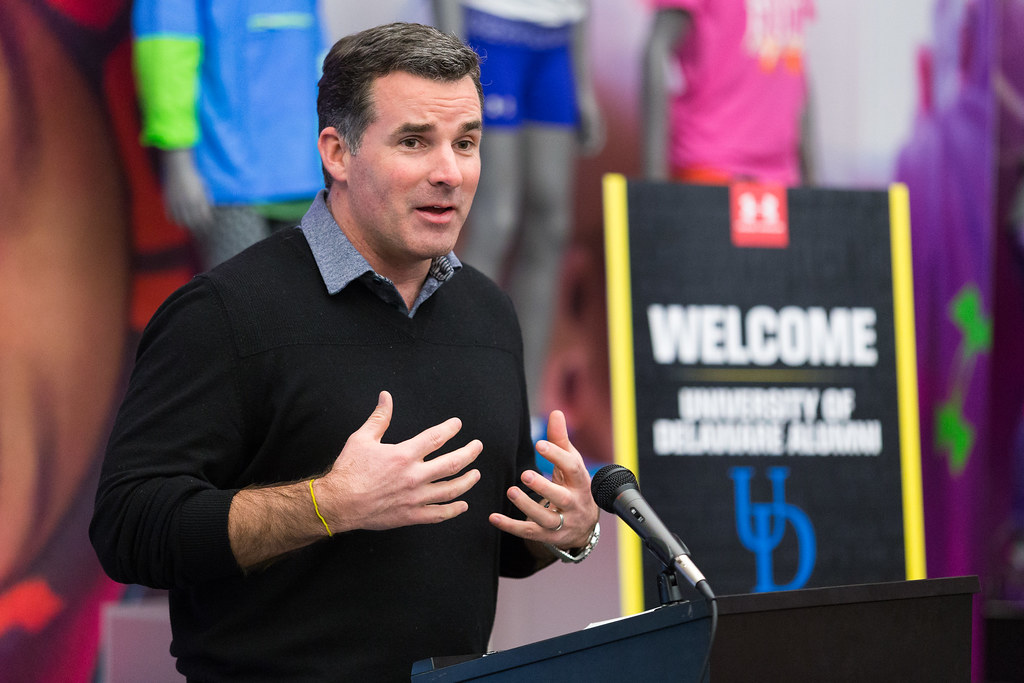 As the CEO and founder of one of the top sports apparel companies in the world-Under Armour, Kevin Plank developed a passion for sport and entrepreneurship from an early age. Born of a father who was a land developer, and a mother who was the town mayor, Plank played for the Maplewood Maple Feats football team and dreamt of playing Division 1 college football. While at the University of Maryland, he launched various businesses and developed an interest in sporting apparel. He attributes his current growth and success to the lessons learned in these early days.

When Plank was around 14 years of age, his brother Scott came home with some knitted bracelets from Guatemala and made a proposition to sell them for the upcoming Dead show in town. Plank sold so many that he says he knew right there and then that he was good at hustling. He would later venture into selling cotton T-shirts outside concert venues with his friend at Maryland. All this as he played football, which he did both in high school and college.

It was the discomfort that came with sweating through his T-shirts while playing football that gave birth to the idea of a moisture-wicking shirt. His idea was to create a T-shirt that would not hold moisture and the moisture weight, and keep the athletes cool and dry in the field. With just $20k in his account saved from the t-shirt selling venture, locally purchased fabric and an ambitious plan, he ventured into the sports apparel industry. This dream would grow into a successful, billion-dollar company called Under Armour.

What Brought the Spark to Create Under Armour?

The sports apparel idea by Prank came from figuring his own sweat. He had gotten tired of having his sports uniform sopped in sweat and figured a way of getting the sweat and its weight off of his body. He wondered why no one had ever addressed the issue of having a short-sleeve t-shirt that was an alternative to the cotton one for summer, and a long-sleeved one for winter. At the time, sports apparel seemed to be an afterthought when it came to sports innovations.

So, Prank got to work from his grandmother’s basement in Georgetown. He got his first fabric from Minnesota Fabrics in Beltsville, Maryland, which was close to the University of Maryland campus. His first t-shirt was made from a stretchy, synthetic material. But he felt the need for a more sophisticated fabric, which saw him drive to New York City, the Garment District on the 34th and 7th avenue corners to get a great shirt done.

The first Under Armour prototype was made in 1966, which he financed with $20 he had saved from selling t-shirts and $40k from credit cards. In the beginning, when Prank was not making any sales, he would give his shirts to the many professional athletes that he had made contact within his football days in high school, the academy, and University. These would then pass them out in the changing rooms, and soon people and clubs were beginning to notice. Soon after, he made his first sale worth $17,000.

Over the years, the company has expanded to a wide collection of sporting apparel suitable for different weather conditions, introduced the women sports bra too, and added athletic shoes and accessories to their product range. Under Armour still maintains their quest and vision of providing performance solutions to athletes and ranks highly in the sports apparel industry. Its operations centers have increased around the world, but their headquarters and hardware remain in Baltimore.

1995 – Plank, while playing football at the University of Maryland, comes up with the idea of a moisture-wicking top for athletes.

1998 – Under Armour creates football team uniforms for Any Given Sunday film.  They also shift operations from the Georgetown basement to a new warehouse and its headquarters in Baltimore, MD.

2000 – Under Armour kicks off its advertising campaigns, buys a print ad on ESPN the Magazine.

2005 – Under Armour became public and started trading as “UARM” at NASQAD, and its initial offering doubled on its 1st trading day.

2015 – Under Armour acquired Endomondo and MyFitnessPal for $475 million to launch a global digital fitness platform.

2016 – UA introduces a smart shoe for athletes that would record time, distance, splits, date, and duration, allowing them to run device-free.

Did Kevin Plank Experience Any Setbacks?

The answer is yes, Plank had some failures too, and he has shared his two major ones.

These Plank failures serve as a good reminder that one should not take failure to be the end of their story. The Under Armour Founder acknowledges they have had ups and downs as a company but have used every one of these stops as a lesson to better themselves. His vision is to see the company triple in size in the near future.