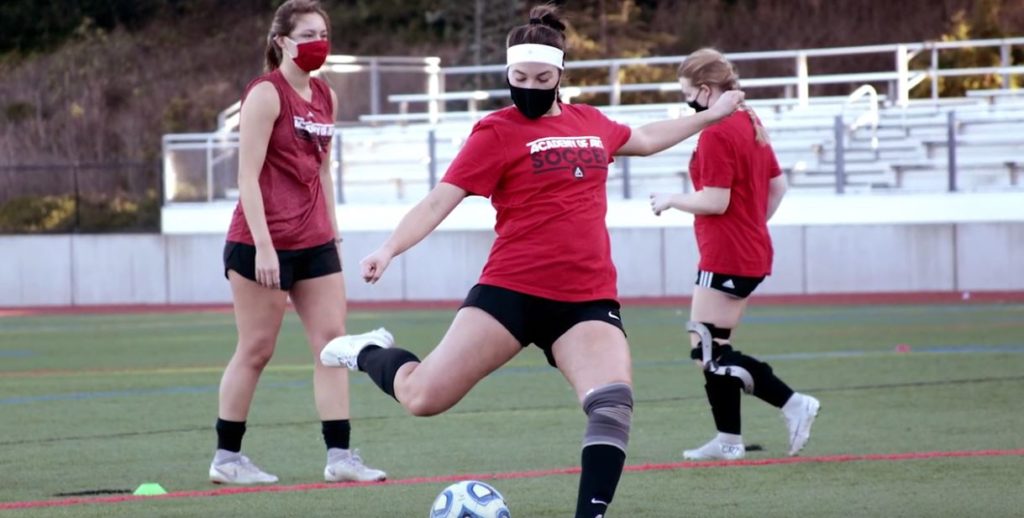 It’s often difficult for students to narrow their study options down to one subject when selecting a higher-education program. This can be especially tough for students who enjoy different types of study, such as arts and sports. But Academy of Art University empowers students by encouraging them to partake in both creative and athletic programs so they can excel in both. It’s for this reason that the Academy is so popular with athletes who hope to pursue art and design careers. In fact, Academy of Art University is the only higher arts education institution in the U.S. that has an NCAA Division II athletics program.

Here, we’ll take a look at a few success stories from Academy of Art University’s athletic students and alumni. These students have gone on to prove that it is possible to flourish in both arts and sports.

Having attended Academy of Art University’s School of Animation and Visual Effects to develop her expertise in toy design, Kristen Sanzari is now one of Mattel’s senior designers. Following extensive studies in graphic design and concept art, Sanzari established her artistic skills with various licensed brands before moving on to such a major player in the toy market. She now enjoys creating toys for leading brands like Disney and Pixar, bringing popular children’s characters from My Little Pony, Jurassic Park,and Teenage Mutant Ninja Turtles to life in toy form.

But Sanzari didn’t just take artistic classes during her time at the Academy. She paired her creative studies with collegiate track and field training, bringing her athletic career to fruition, too. Thanks to her Academy training, Sanzari has finished in the top 10 at the PacWest Conference Champion and set a record in the 1,000m indoor track and field. She is delighted that the Academy allowed her to pursue both her sporting and artistic interests to develop a thriving, two-strand career.

“It was so awesome to be able to finish out my collegiate cross-country and indoor track eligibility at Academy of Art,” Sanzari says. “I definitely think my experiences as a student-athlete have helped contribute to where I am today. You learn time management and how to get things done efficiently. You are committed to constantly trying to improve, and through hard work, discipline, and a lot of training, you learn what you need to do to achieve your goals.”

The story of basketball player and communications student Syon Green’s journey to the Academy is an inspiring one. Years ago, the former freshman student took part in the Soledad State Prison’s Life CYCLE (Careless Youth Corrected by Lifers’ Experiences) program, in which Palma School students and inmates formed a book club. But when Green reached his sophomore year, both of his parents fell ill and could no longer fund his education. Luckily, the inmates he had helped stepped in to offer support.

Palma School’s English and Theology teacher Jim Michelleti explains that the inmates approached the school with a surprising offer.

“They said, ‘We value you guys coming in. We’d like to do something for your school. Can you find us a student on campus who needs some money to attend Palma?’”

Palma School nominated Green. The inmates raised $30,000 for him to complete his school studies, which allowed him to apply for a communications degree at the Academy. The inmates raised funds through their prison labor tasks, some of which paid as low as eight cents an hour. One inmate even donated his entire $100 monthly paycheck to Green’s cause.

Green is now a student on one of the Academy’s communications programs and plays an integral role in the ART U men’s basketball team.

“Syon’s community service in the prison system is a testament to the fine young man he is,” says Head Coach Scott Waterman. “It has been a pleasure to get to know him over the past few months and we look forward to his growth and development, both on and off the court over the next four years.”

Green remains in contact with the inmates who funded his education, and CNN has featured his story in the This is Life with Lisa King documentary series.

Communications and media technologies student Devin Williams has excelled in his Academy studies and gone on to combine his digital and sporting skills in numerous creative enterprises. Today, he entertains around half a million YouTube subscribers, over 300,000 Instagram followers, and around 50,000 Twitter followers. He’s also part of the NBA Playmakers (a digital video network for creators targeting basketball culture) and is now developing merchandising apparel, a blog, and a podcast.

During his time at the Academy, Williams balanced his digital studies with his role as an Urban Knight athlete for the men’s basketball team. Since then, he has developed the popular YouTube series, Ten000Hours, a documentary that follows two high school students who aspire to become basketball student-athletes. The series tests Malcom Gladwell’s 10,000-hour rule, which argues you must invest 10,000 hours of consistent practice to become an expert in your field. Williams has used his Ten000Hours success to build his latest project: In the Lab. This series follows Williams as he travels around the U.S., seeking up-and-coming basketball players who he can coach to success.

“Being a student-athlete mainly taught me how to draw inspiration from different places like Hawaii and Utah being on the basketball team. The different places allowed me to get away and think of new ideas, so I still use that to this day.”

Williams is grateful to his Academy coaches – both artistic and sports-related – for helping him on his way to his success. He is particularly thankful to the Communications teaching staff, including director Jan Yanehiro, associate director Steve Kotton, instructor Richard Hart, and former instructor Toan Lam.

“[I am using] everything I learned from COM and MPT [School of Motion Pictures & Televisionl], from how to interview a person, how to put together a video, how to match the mood with music, to the podcast classes where I learned how to narrate. It was cool to just be taught by people who were actually working in the field instead of those who are not.”

Prospective students who don’t want to choose between art and sports can pursue both and achieve success at Academy of Art University. Aside from the Academy’s top ranking as an arts university, its Urban Knights athletes have made 35 NCAA National Championship appearances, excelling in an array of sports spanning from baseball, soccer, softball, volleyball, and basketball to cross country, track and field, tennis, and golf. The Academy’s 14 varsity athletic teams represent the university in NCAA Division II intercollegiate sports, echoing the Academy’s commitment to teamwork, sportsmanship, and creativity.